Cancelled – An Afternoon with Shane Claiborne and Tony Campolo 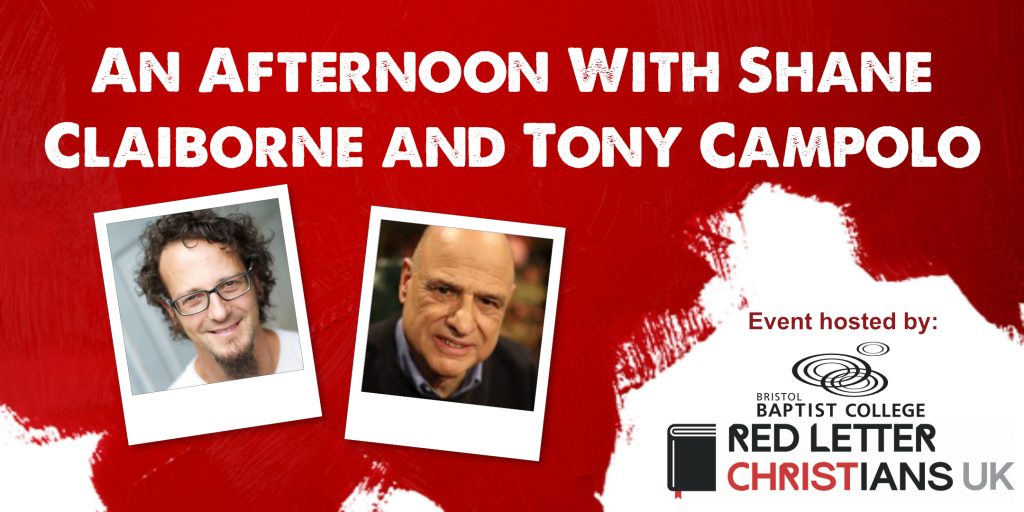 Due to the current Corona Virus outbreak this event has been cancelled. Keep on eye on our website and social media though, as we hope to reschedule this event for later in the year when it is safe to do so.

Join us for an afternoon of conversation with Shane Claiborne and Tony Campolo.

Tickets are free but an offering will be collected on the day for Red Letter Christians.

Book your ticket at https://redletterbristol.eventbrite.co.uk

Shane Claiborne is a prominent speaker, activist, and best-selling author. Shane worked with Mother Teresa in Calcutta, and founded The Simple Way in Philadelphia. He heads up Red Letter Christians, a movement of folks who are committed to living “as if Jesus meant the things he said.” Shane is a champion for grace which has led him to jail advocating for the homeless, and to places like Iraq and Afghanistan to stand against war. Now grace fuels his passion to end the death penalty and help stop gun violence.

Shane’s books include Jesus for President, Red Letter Revolution, Common Prayer, Follow Me to Freedom, Jesus, Bombs and Ice Cream, Becoming the Answer to Our Prayers, Executing Grace, his classic The Irresistible Revolution, and his newest book, Beating Guns. He has been featured in a number of films including “Another World Is Possible” and “Ordinary Radicals.” His books have been translated into more than a dozen languages. Shane speaks over one hundred times a year, both in the USA and internationally. His work has appeared in Esquire, SPIN, Christianity Today, TIME, and The Wall Street Journal, and he has been on everything from Fox News and Al Jazeera to CNN and NPR. He’s given academic lectures at Harvard, Princeton, Liberty, Duke, and Notre Dame.

Tony Campolo is Professor of Sociology at Eastern University, and was formerly on the faculty of the University of Pennsylvania. For 40 years, he founded and led the Evangelical Association for the Promotion of Education, an organization that created and supported programs serving needy communities in the Third World as well as in “at risk” neighborhoods across North America. More recently, Dr. Campolo has provided leadership for the Red Letter Christians movement. He blogs regularly at his own website. Tony and his wife Peggy live near Philadelphia, and have two children and four grandchildren.

The goal of Red Letter Christians is simple: To take Jesus seriously by endeavoring to live out His radical, counter-cultural teachings as set forth in scripture, and especially embracing the lifestyle prescribed in the Sermon on the Mount.

By calling ourselves Red Letter Christians, we refer to the fact that in many Bibles the words of Jesus are printed in red. We, therefore, assert that we are committed first and foremost to doing what Jesus said. Jesus calls us away from the consumerist values that dominate contemporary America. Instead, he calls us to meet the needs of the poor. He also calls us to be merciful, which has strong implications in terms of war and capital punishment. After all, when Jesus tells us to love our enemies, he probably means we shouldn’t kill them.

Staying true to the foundation of combining Jesus and justice, Red Letter Christians mobilizes individuals into a movement of believers who live out Jesus’ counter-cultural teachings.